Allie Nichols ran down the long, shadowy hallway, trying to reach the source of the sound. The sadness and hopelessness of it tore at her heart.


She had to find out who was in such terrible misery. But it was so dark, so difficult to see!

She followed the cries through countless twists and turns and found herself at a dead end. She forced herself to stop and listen, to try to get her bearings. At first she couldn't hear anything but the rasp of her own breath, ragged from running. Then — there! A whimper, but fainter now than before, farther away.

She had gone the wrong way! Racing back, she followed the pitiful sound through the endless corridors. Sometimes she thought it was the cry of a baby; at other times she was sure it was someone older. The next moment it sounded like an animal or a bird. She desperately wanted to help, but first she had to find whoever — or whatever — it was. Nearly weeping with exhaustion and frustration, she turned a corner, only to reach another dead end. The wail faded to a plaintive whimper and stopped. Now crying, Allie pounded the wall with her fist — and woke up.

She had been beating, not on a wall, but on her pillow. Uncurling the fingers of her fist, she sat up and wiped the tears from her cheeks. Her mind cleared and the foggy wisps of her dream receded, but she was left with a lingering feeling of sorrow. Along with the sorrow was a sense of excitement — and dread. For Allie knew what the dream meant. Twice before she had wakened from urgent nightmares like this one. Both times the dreams had been messages from someone who wanted her help. Both times that someone had been a ghost. When Allie went downstairs to breakfast the following morning, her mother was talking on the phone, a worried expression on her face.

One look at her four-year-old brother, Michael, and Allie knew why. His eyes were red and puffy. He glanced up at Allie, sniffled, and exploded in a sneeze. Nichols was saying into the phone. Could you cover the store for me today? Thanks, Reggie. I'll call you later to see how you're doing. Thanks again. Turning to her brother with a sympathetic smile, she said, "Mikey, you don't look so hot.

Nichols came into the kitchen, his briefcase in his hand.

The Ghost of Cutler Creek

For a moment, Allie thought she did catch a whiff of something "poopy. Allie laughed and got up from the table to get ready for school.

She called her best friend, Dub Whitwell, to say she was walking, and that she'd meet him at the corner. It sounds as if Allie Nichols, Ghost Magnet, is back in action. In his voice Allie detected the same combination of fear and excitement she'd felt on awakening from the dream.

She nodded, saying, "I think so, too. I wouldn't miss this for anything. Allie smiled. Dub had helped her enormously during her two previous ghostly adventures. He was the only other person who knew she saw and heard ghosts, if you didn't count Michael. And Allie didn't, really, because while Michael saw and heard them, he didn't understand that they were ghosts. And what it wants. They were passing Luv'n' Pets, the local pet store.

As usual, Allie stopped to look at the puppies in the front window. There were new ones every couple of weeks. The last batch of yellow furballs had been replaced with a litter of seven tiny brown-and-white furballs. 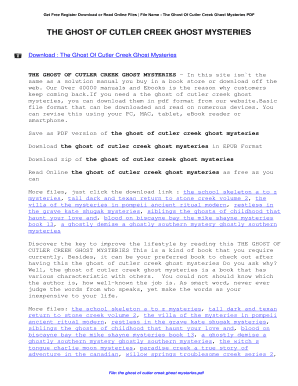 But this time she was distracted by an unpleasant tingle that ran through her body. He was back. Or she — or it. Anyway, the ghost! Henry and Hoover for an end-of-the-year present. Henry was Allie and Dub's sixth-grade teacher. Hoover was his beloved golden retriever, and the class mascot. It was the next-to-the-last day of school, and, although excited about summer vacation, Allie couldn't bear to think that her days in Mr.

Henry's classroom were coming to an end.

He was without a doubt her favorite teacher in the world. She was going to miss him — and Hoover — terribly. Henry said the vet told him Hoover has to go on a diet? Well, a friend of Mom's made up a recipe for low-calorie, healthy dog biscuits, and Mom found a bone-shaped cookie cutter, so I'm baking some treats for Hoover. And I'm making a collar for Mr.

The Ghost of Cutler Creek

I started it last night, and it's turning out pretty good. I'm making it out of red cord, and I'm sewing Hoover's name and phone number in black. When they walked into their classroom, Allie noticed a boy she had never seen before standing by Mr. Henry's desk. The bell rang, and all the kids found their seats, except for the boy, who continued standing. Cutler," Mr. Henry announced.